In a chilling eight-minute segment, ABC 20/20 investigates the carbon monoxide deaths at the Best Western hotel in 2013.

It features an interview with Jeannie Williams, the mother of 11-year-old Jeffrey Williams who became the third person to die in Room 225 of the Best Western hotel in Boone during a two-month span last year.

My last vision I have of him is just sitting on the edge of the bed and him holding the iPad and playing a game.Jeannie Williams

The segment also includes an interview with Damon Mallatere, the president of Appalachian Hospitality Management, which oversaw the Best Western at the time of Jeffrey’s death. Mallatere was recently charged with three counts of involuntary manslaughter and one count of assault for the permanent brain damage that Assistant District Attorney Britt Springer – at a press conference in the Watauga County Courthouse two weeks ago – said Jeannie suffered. 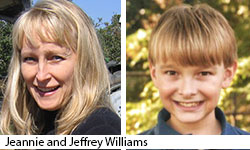 “I don’t believe that anybody that was in any way involved, whether it be the authorities or the contractors or my employees or myself should go to bed tonight and not feel responsibility,” Mallatare told ABC News. “[But] I would never willfully hurt a guest if I knew that I could keep that from happening.”