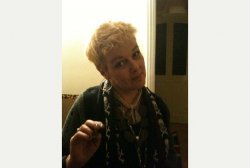 A MUCH-LOVED mum who died at her home in Pound Hill just hours before she was due to host a New Year’s Eve party was killed by carbon monoxide poisoning, an inquest has heard.

Maria Woodhead was found unconscious by her son after a fire at her home in Banks Road on December 31, 2013.

Initially it was thought that the 51-year-old was killed in an explosion caused by the blaze but at an inquest yesterday, in Horsham, it was revealed that she had been killed by carbon monoxide poisoning while she slept.

A fire broke out in an airing cupboard at the house while Miss Woodhead, a legal assistant for Geoff White Solicitors, was home alone.

An electrical fault was found in a junction box in the cupboard but experts were unable to say whether that was the cause of the fire, or if the fault was caused by the fire.

In a statement read out at the inquest, forensic fire investigator Daniel Matthews said: “The most likely cause was an electrical fault in the area of the switches and junction box in the airing cupboard.”

Miss Woodhead was found by her son, Joe, who had come home just after noon to find water dripping down the walls and through light fittings. A pipe had been ruptured by the fire.

He found his mother unconscious on her bed, where she had laid down to sleep ahead of a party to ring in the New Year that night. She was found to have some alcohol in her blood, but not a significant amount.

A post-mortem also found levels of carbon monoxide toxicity in her body of 62 per cent, well beyond the amount which would normally be fatal.

During the investigations into her death police had looked into whether anyone else could have started the fire.

They also looked into the possibility that Miss Woodhead had started the fire herself, as she had previously attempted to commit suicide. However this was ruled out.

Assistant coroner Mr Turner concluded: “Maria Woodhead died from carbon monoxide poisoning. The carbon monoxide resulted from a fire and that fire originated in an airing or storage cupboard, in the electrical systems.

“Experts cannot say with any real certainty whether the electrical systems fault caused the fire, or was caused by the fire due to the damage caused.

“I find nothing to suggest there was any act by Maria. She was looking forward to having a party and expecting her first grandchild.”